FoNNaP: The Road Monsters Are Responsible For A Whopping 129 Road Kills! 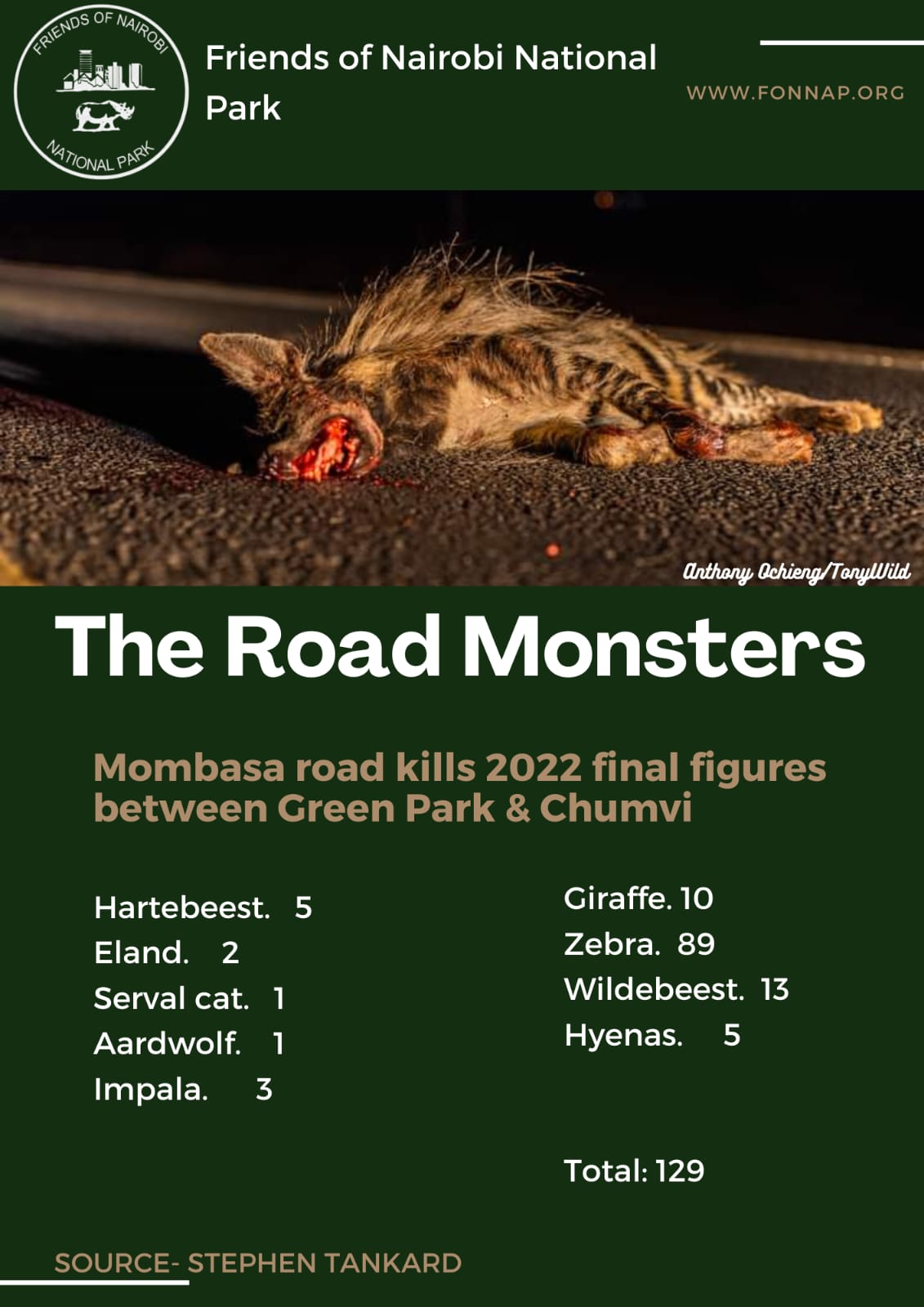 The stretch of road on Mombasa road between Green Park and Chumvi is a dual carriageway to reduce traffic congestion between the countries capital Nairobi and the major port city Mombasa. While the road plays a major role in maintaining connectivity between the different parts of the country, it has adverse effects on wildlife conservation as it cuts across a wildlife dispersal area. It has led to reduced habitats and connectivity and isolation of wildlife populations which in turn impacts genetic diversity and increased genetic isolation resulting in reduced evolutionary potential of the species in the area. Animals that dare to cross face the possibility of being hit by moving vehicles, as the road construction did not take into consideration wildlife crossings such as wildlife tunnels and green bridges.

The drought affecting most parts of the country has not spared the Athi-Kapiti ecosystem, prompting an increase in the rate of wild animal movement across the area. Mombasa road cuts across the Athi-Kapiti plains, which serve as an important dispersal area connecting Nairobi National Park to Ol Donyo Sabuk and Tsavo. It disrupts what was once a free migratory route. The need for water, food and mates especially during this harsh climatic period necessitates the crossing of wild animals on the busy road which in turn increases the probability of collisions.

Increased population and land fragmentation on the Athi-Kapiti plains, has contributed to the need of wildlife crossing to the different sides of the road. Land available for wildlife is decreasing at an alarming rate, necessitating wild animals to forage vast tracts of land to get their fill and in the process fall prey to careless motorist using Mombasa road.

Over speeding and poor visibility, especially at night, account for the most number of wildlife collisions that occur along the stretch of road between Green Park and Chumvi. The road kills contribute to an already decreasing wildlife population which is also being affected by climate change, habitat destruction and fragmentation among other problems.

There is need for modification of the road to create space for wild animal crossing along the busy road so as to conserve our wildlife and reduce the challenges they are facing. Inclusion of wildlife conservation specialist to advise on sustainable development in future road construction projects that pass through wildlife ecosystems will go a long way in conserving our much treasured wildlife.