Cinderella The Musical- The Wait Is Over: 26th-28th October!

Aperture Africa Production has been running for the last 10 years now. Its humble beginnings started with a cast and crew of 10 – 12 pax, with an audience size of about 200. A decade later, it is now a fully fledged production house with cast & crew of over 100, and audience grown to over 3000 per production.

We staged our first musical in 2016 with the Jungle Book closely followed by Robin Hood and his gang of outlaws, both of which were nominated for several awards and scooped the following awards:
1. The Asian Weekly Achievers Awards for Best Local Entertainment event of 2016 and 2017.
2. Kenya Buzz award for Best Musical of 2016
3. Sanaa Awards for Best Set, Sound and Lighting of 2016

Amar Desai & Jinita Desai are a vibrant duo. Amar Desai is a TV & Theatre Studies graduate from the Curtin University in Western Australia. He is also a Certified Moderator for Cambridge Examinations for Drama. He has spent over 8 years teaching drama and theatre to various age groups and currently runs short acting workshops for children (the next workshop is 27 Nov – 8 Dec 2017). Jinita Desai holds a degree in finance with years of experience in the field. This aside, who knew she had creative fingers up her sleeve. Together, they have brought to town some of the finest theatricals witnessed to date. 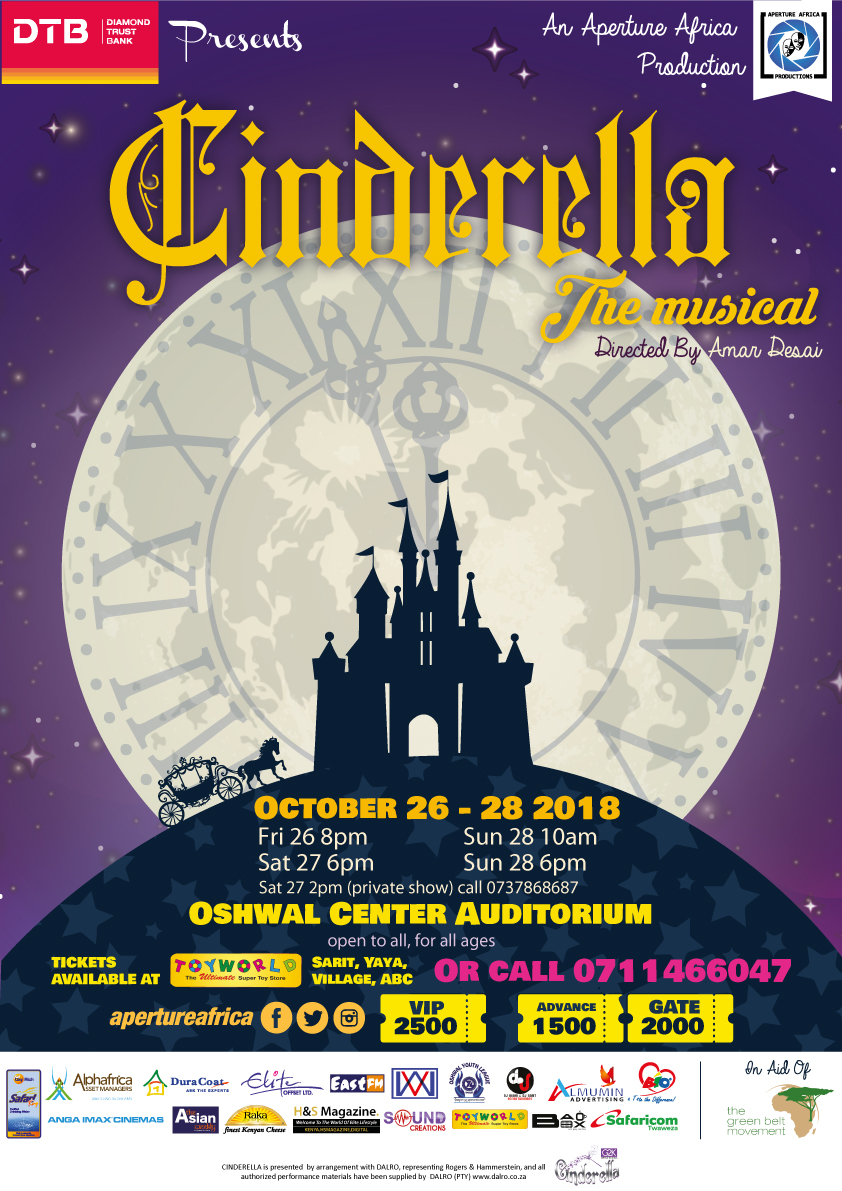 About the show:
After the amazing buzz they have created in the Kenyan theatre world with their award-winning musical, The Jungle Book and Robin Hood, Aperture Africa is back with a bigger, grander production of the ever-green tale of Cinderella and her glass slipper. An ever-green favourite for the whole family staging at the Oshwal Centre Auditorium in aid of the Greenbelt Movement.

It is based upon the fairy tale Cinderella. The story revolves around a young woman forced into a life of servitude by her cruel stepmother and self-centered stepsisters, who dreams of a better life. With the help of her Fairy Godmother, Cinderella is transformed into a Princess and finds her Prince. Unfortunately the magic only lasts up to the stroke of midnight and she is forced to run off before she can truly experience the magic she left with the Prince.

The story includes an array of characters including Jean Michel- the Rebel, a bunch of unhappy citizens and a lonely prince desperately in search of his true identity and love.

The musical has a fully-fledged orchestra, live song and dance, and as Aperture Africa is well-known for, some tantalizing stunts and magic! You cannot miss this vibrant musical geared for all ages, from the toothless toddlers to the…. well, toothless grandmas 😉 This is everyone’s childhood memory revived and relived!
Because of the magnanimous costs of productions such as these, we are unable to do this without the support of our sponsors, well wishers and partners. This time, Cinderella has been brought to you by Diamond Trust Bank and supported by a large number of corporate organizations. We are staging the production in aid of the Greenbelt Movement founded by the late Professor Wangari Mathai.

The show is a spectacle of dance, a full orchestra, exquisite dance routines, a grandeur of costumes and a magical experience for the whole family! We have a full cast and crew of close to 70 people.

The show is directed by Amar Desai.

H&S Magazine is proud to be associated with Aperture Africa Production! Come watch this beautiful musical with your family & friends!