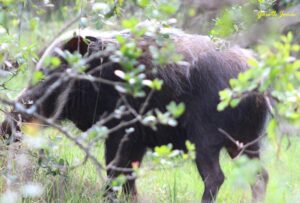 There is something mysterious and wondrous about being in a natural forest, and the Langata forest part of the Nairobi National Park is such a place. The thick bush is a hiding place for many species, including some rarely seen species. Driving slowly along some of the many narrow roads through the forest, often causes me to have a feeling that there could be a special sighting at any moment.

When driving through the Langata forest, sometimes when we least expect to see something special, it is when we are not completely ready. I had just driven from the Langata gate very early one morning a few years ago, when as I rounded a corner, three tiny little striped furry creatures ran across the road in front of me, just as I was trying to register, a large bushpig crashed through the bushes, crossing the road, in front of me and running after its newborn babies, no doubt to try and protect them from the unexpected visitor in the noisy fuel smelling metal machine. Adults can be very aggressive, especially when they have young. I watched as the bushpig quickly herded the piglets to the safety of thick forest bush. WOW! What a rare and awesome sighting, just as I was about the drive away another bushpig (possibly the boar) charged across the road the join the rest of the family. Then I scolded myself for not having my camera ready to take photos of the piglets, however, I did manage to do a quick click of the sow before she disappeared into the thick bushes.

In many years this was only my second sighting. I remember many years ago finding some bushpig feeding on the carcass of a young dead buffalo, as they do also eat meat occasionally. Bushpigs are seldom seen because of their predominantly nocturnal secretive habits and because they normally frequent thick bush. The sub-species of bushpig found in the Nairobi area is Potamochoerus larvatus hassama. Adult bushpigs stand from 66 to 100cm at the shoulder, and mature boars can reach a weight of 150 kg, although 60 to 80 kg is more common. Males are normally larger than females. Sows are 45 to 70kg. They resemble the domestic pig and can be identified by their pointed, tufted ears and face mask.

Bushpigs vary in hair and skin colour over their range. The coat colour darkens with age. Their heads have a ‘face mask’ with a contrasting pattern of blackish to dark brown and white to dark grey markings, or may sometimes be completely whitish. The ears have tassels of long hairs. Their very sharp tusks are fairly short and inconspicuous. Unlike warthogs, bushpigs run with their long and thin tails down.

Piglets are born with pale yellowish longitudinal stripes on a dark brown background, these soon disappear and the coat becomes reddish-brown, with a black and white dorsal crest in both sexes. This mane bristles when the animal becomes agitated.

It should be noted that Bushpigs are very sensitive and elusive. They choose to live in densely forested areas and can detect threats, noises, etc from a far distance. They tend to avoid motor vehicle sounds and do not like to be seen in open areas, where they feel vulnerable. Even though bushpigs are present in an area, they are rarely seen.

Bushpig although rarely seen can be found in the forested and riverine areas of the Nairobi National Park. So just remember to always be ready, sometimes action happens very near to the main gate, drive in the early morning or late afternoon slowly through the trees, it will always be rewarding.

God has created many wonders for us, humans, to enjoy and appreciate, and seeing an elusive bushpig is one of them.