The DTaP Vaccine: What All Parents Need To Know! 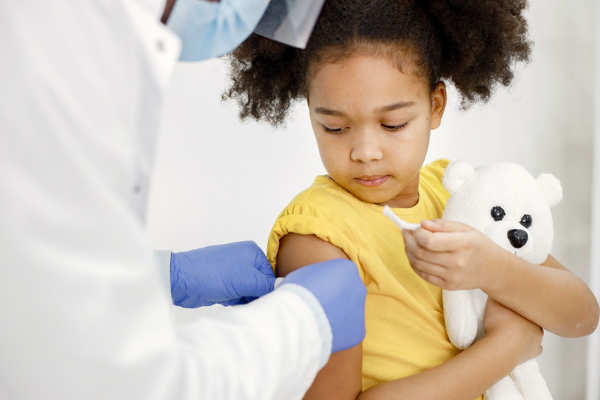 The DTaP vaccine is a 3-in-1 vaccine that contains inactivated forms of toxins (produced by the 3 bacteria that cause the diseases), given to children under the age of 7 in 5 doses on the arm or thigh, to help develop immunity against 3 infectious and potentially dangerous diseases namely Diphtheria, Tetanus & Pertussis.
Diphtheria – An infectious respiratory disease caused by the bacteria Corynebacterium diphtheriae that multiplies on/near the surface of the throat, skin & can produce toxins usually in the nose and throat, that can also travel through the bloodstream to other vital organs such as the heart & kidneys as well as attack the nervous system. It is highly contagious, and can spread easily through contaminated droplets in the air via coughing, sneezing, or contaminated personal items such as used tissues contaminated with the bacteria. It can also spread by touching an infected wound. People who have had diphtheria and haven’t received treatment (symptomatic & asymptomatic) can infect an unvaccinated person. This disease can lead to breathing issues, paralysis, heart failure and even death.
Tetanus – Also known as lockjaw, is an infection caused by the toxin-producing bacteria Clostridium tetani that affects the brain & nervous system. The bacteria are found in the soil, dust, manure and if it enters a body, through contamination of an open wound or cut, can invade the body and produce toxins that can lead to painful involuntary muscular contractions that begin mainly in the neck and jaw and can progress to the rest of the body, making it hard to swallow & breathe and can even lead to death.
Pertussis – Also known as whooping cough, is a highly contagious respiratory disease caused by the bacteria Bordetella pertussis that spreads mainly via airborne respiratory droplets through coughing or sneezing. It causes uncontrollable, violent coughing bouts which causes difficulty in breathing & can cause death in babies.

When Should Your Child Get DTaP?

It is recommended that your child receives a total of 5 doses of DTaP before the age of 7, at the following ages:

Note: Your child can receive DTaP alone or even as a part of a combination vaccine.

TDaP on the other hand, also known as a booster dose contains a reduced dose of diphtheria & pertussis vaccines, is given to children ages 11+ and adults 19 to 64 years of age, to help boost the immunity that wanes off from the vaccines given at ages 4-6 years.

What Are The Risks Of Getting The Vaccine?

It’s important to understand, just like any medication, vaccines, too, can have side effects. Having said that, the risk of serious side effects are small in comparison to an unvaccinated child contracting a serious illness.

When Should My Child NOT Get The DTaP Vaccine?

If your child is moderately or severely ill at the time due for the vaccine, should wait until they recover before getting it.

A child with severe allergic reactions after receiving a dose of the vaccine should not be given another dose.

A child who suffered from a brain or nervous system disease within 7 days of receiving the vaccine should not be given another dose.

You should always notify your child’s doctor if something unusual, such as your child had a seizure or collapsed after a dose, unconsolably cried for 3+ hours after receiving a dose, had a fever >105 °F. If you are not certain, always talk to the paediatrician and ask questions to help clarify your doubts.