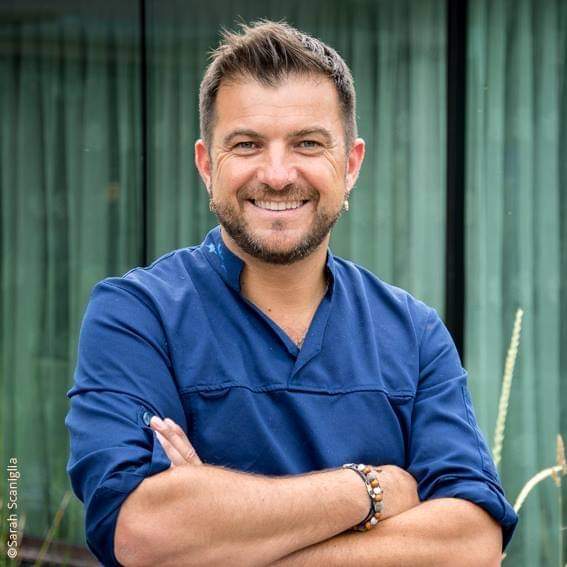 Who Is Eric Guérin?

Eric’s key strengths are undoubtedly his creativeness and forcefulness, nurtured from his daily life. He has been able to impose his style throughout the years, in 2000 was awarded his first Michelin star, and the National Order of Merit presented in person by President Nicolas Sarkozy the following year.

A fascinating chef with a “rock-star” look has an intimate knowledge of working with produce to bring out the finest in his dishes, has recently opened a new establishment in Giverny: Le Jardin des Plumes.

His cooking inspiration is really large, it comes from his travels, encounters, but also from events from around the world. The chef wants it “alive”, all in relief, with seasonal product, textures, and temperatures… to tell stories, to convey emotions. For him, it is decidedly contemporary and enriched every day. His signature is sour and the texture. He creates today never knowing in advance of tomorrow, he creates more than 300 recipes a year.

His cooking is an islander cuisine (he lives on an island in the Brière Marshland, the Island of Fédrun), as everyone who lives on the islands, he had always wanted to travel, to cross the sea, but like all those people attached to their land, once he is away, their only desire is to go back home.

His kitchen tells the story of these trips, shared between the idea of going away and returning to its roots. It is based on local products to which he adds numerous touches to make it travel far away, however, the product stays essential and reminds us to go back to where it comes from; in his imagination or in the plates, he always uses the birds as support of migration trough the world.

Reinvented French cuisine, strongly bonded with my territory. I live on an island in a soft water swamp, surrounded by the sea. My cuisine is constructed around nature and is wildly emotional. Based on very simple or current/daily ingredients I aim at sculpting my dishes like jewels to give them nobles high gastronomy values. I imagine my dishes like seasonal pictures in which my favorite touches are local food, respect, human, harmony, and beauty.

The desire to build a house constructed around an Art de Vivre, a strong lifestyle where nature and arts reunited, and a sharing and transmission spirit. My hotel and restaurant is a living window right open on the passion I have for my adoption area.

To start from zero with a little cottage/chaumiere in the middle of nowhere and to be able to transform it with my teams to a beautiful and radiant Michelin Starred restaurant and four stars hotel that attracts people from all around France and Europe.

To be able to keep the human (my team) in the center of my inspiration and to build a blooming team in a very hard industry.

When It Comes To Cooking What Is More Important To You The Technique, The Ingredients, Or The Creativity?

For me, ingredients inspire creativity and I finally need techniques to achieve my dreams.

Recipe Of The Week: Snail Candies

Blanch the spinach leaves in a pot of boiling water for about 10 seconds, then cool directly, drain and dry well. In a small bowl, place the seasoned snails and add a drizzle of olive oil. Spread out the spinach leaves, place a snail on each and cover with previously washed garden herbs. Close by forming small candies, then place them on the Thermomix® steam tray. Cook for 4 minutes /Varoma® / speed 2, season with salt and pepper.

Arrange on small individual plates, gently place a snail, with a touch of Agastache gel and a little herb to finish. Serve warm 😉