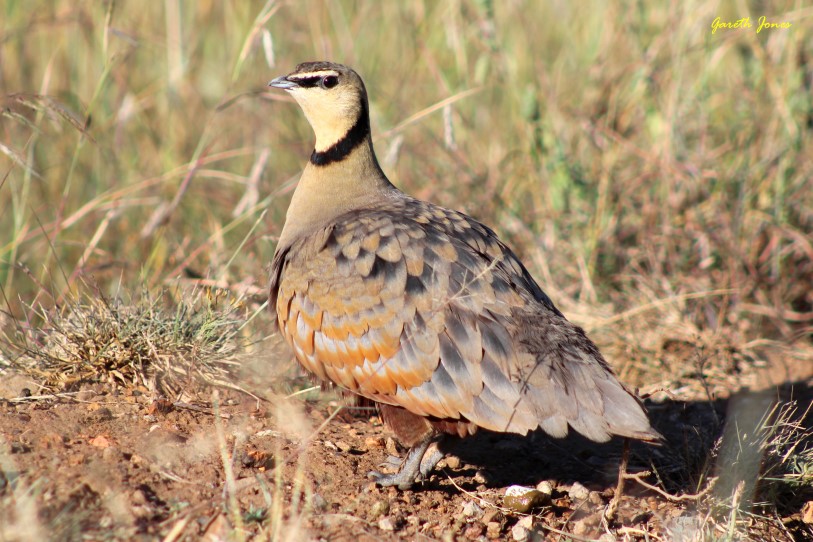 After another dry and dusty dark night, three tiny little black-faced sandgrouse chicks began to “cheep-cheep” to their parents that they were getting very thirsty. The sun was just beginning to rise when their caring father finally took off in a quest to find fresh drinking water while the mother continued to assist the chicks in their daily food-finding lessons. Due to the prolonged drought, he had to travel over long distances every day, and faced many dangers on every “sandgrouse safari”, so that he could bring life-giving moisture to the chicks. After taking a few sips of thirst-quenching water, and lying down in the water to allow water droplets to stick onto his belly feathers, he immediately took off and headed straight back to the family. Sandgrouse belly feathers are specially adapted for absorbing water and retaining it, allowing adults, particularly males, to carry water to chicks that may be many miles away from watering holes. The amount of water that can be carried in this way is about 15 to 20 milli-litres. It might seem such a little from a human perspective, but for sand grouse chicks it is a critical survival lifeline.

There are sixteen known species of sandgrouse on earth. They are traditionally placed in two genera. The two central Asian species are classified as Syrrhaptes and the other fourteen species, from Africa and Asia, are placed in the genus Pterocles. They are ground-dwelling birds restricted to treeless, open country, such as plains, savannahs and semi-deserts. The open low land savannah parts in the southern sector of the Nairobi National Park are typical of the terrain that attracts dry country birds like sandgrouse. The particular species found the most in the Nairobi National Park is the Yellow-throated sandgrouse (Pterocles gutturalis) found in parts of East Africa and Southern Africa over a wide range. Yellow-throated Sandgrouses have small, pigeon-like heads and necks and sturdy compact bodies. They are ground-dwelling birds of grasslands and savannas where their mottled brown, black and white plumage affords excellent camouflage. They also pair for life forming a close bond. However, I have also seen the less often seen, black-faced sand grouse (Pterocles decoratus) at the Athi river dam, they are normally found more in the drier areas towards Tsavo, Meru and Amboseli.

The park has a great variety of birds (over 500 species if including seasonal migrants) and sandgrouses are one of the amazing creatures found in the park. I always find it a joy to see birds when driving in the park, God has created such amazing diversity. When you go to the Nairobi National Park especially in the southern section, in places like the Athi basin dam, it can be very rewarding to have sandgrouse sightings in the early mornings. Sitting quietly and watching them as they go on the daily “sandgrouse safari”!