Rabbits Or Hares Of The Nairobi National Park? 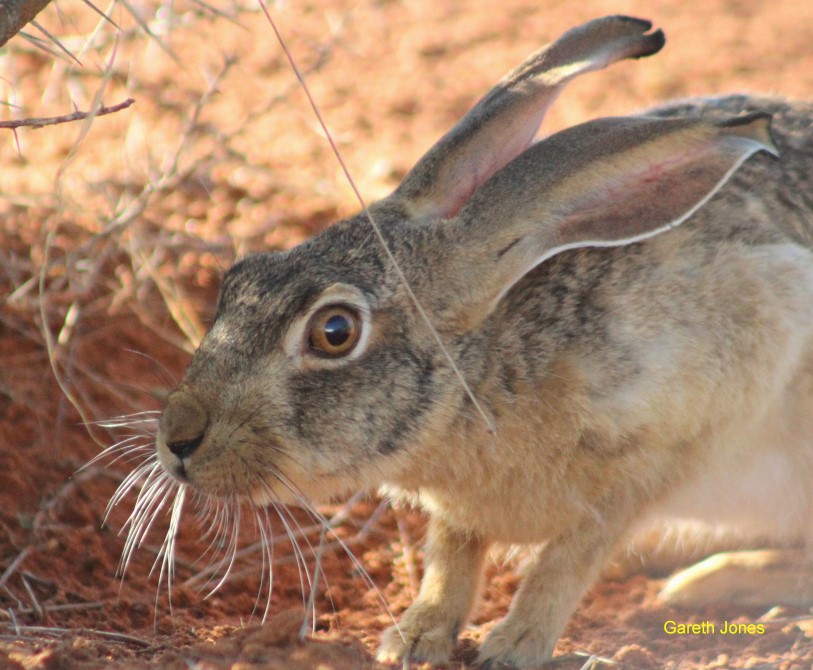 It was late one afternoon on a cloudy day, as I drove through the Langata forest section, it was getting darker quickly in one area there were many furry little creatures hopping all over the place as the vehicle lights seemed to have an effect on them, freezing until the last moment and then running in a zig-zag motion, as if to try and fool the noisy “metallic predator” and get away.

The furry creatures are all scrub hares, often mistakenly called rabbits, but even though they do look similar, there are many differences. Rabbits are not found in the Nairobi Park and are born blind, naked and virtually helpless in a burrow, while the tougher hares are born with fur on the ground, can see at birth and can fend for themselves in a very short time. Hares are generally larger, with longer ears and hind legs. In the wild hares can breed rapidly but also have a very short lifespan usually not much more than a year or two at most. Hares have jointed, or kinetic skulls, unique among mammals. Interestingly hares have 48 chromosomes while rabbits have 44. Hares and jackrabbits are leporids belonging to the genus Lepus. Hares are therefore also classified in the same family as rabbits.

Hares are a food source to many predators ranging from snakes to eagles, serval cats and even leopards. Rabbits and hares have different diets. Rabbits prefer soft stems, grass or vegetables, hares eat more hard food; bark and rind, buds, small twigs and shoot. A Rabbit’s fur coat remains the same colour year-round, while hares change colour from greyish brown in summer to white in winter. Hares also have excellent camouflage with the coat patterns. To avoid detection from predators, they will move close to the ground and lie their ears flat on their backs. When running away from danger, they’re capable of reaching speeds up to 70 kilometres or 43 miles per hour. Their hind legs are very powerful and can proper them on leaps of more than 3 meters or 10 feet. Their upper lips are split and underneath them are a pair of long front incisors that never stop growing. They constantly grind their teeth down by gnawing and chewing on anything they find. They’re herbivores, which means that their diet is plant-based. Their diet consists of grass, fruits, vegetables, seeds, nuts and some fungi. A male hare is called a “jack.” A female hare is called a “jill.” A young hare offspring is called a “leveret.” A group of hares is called a “drove.”

No doubt many people are familiar with the old story of the tortoise and the hare, how the hare and the tortoise had a race, the hare was very fast while the tortoise was very slow. The hare was very arrogant and overconfident and decided to take a nap while supposedly running the race. However, the tortoise simply plodded onwards, slow but steady without stopping. All too soon the finishing line was in sight, the tortoise was close to finishing as the hare awoke from slumber. Suddenly the hare realized that the tortoise had passed by and ran at full speed to try and catch up. However, it was too late, the tortoise stepped across the line ahead of the hare. While this is a mere story, I believe it has a moral for us humans to consider in life, in that being consistent and steady with the goals and purposes in life, without allowing distractions, will ultimately ensure that success is achieved. I’m often reminded of that “life lesson” story when I see a shrub hare or a tortoise.

So next time you are in the park in the early morning or late afternoon, watch out for the scrub hares as well, you never know what predators you might see while you do that.