Nairobi, September 7th 2018: Pine Creek Records is thrilled to announce the official unveil of a new member to their family, Mankind, at the exclusive private club, Capital club. This new duo is bound to hit the streets with a bang, they are different, innovative, fresh and nothing like what we are used to hearing from our Kenyan artists. They will surely be the first to bring a Grammy award home.

They are an alternative music duo from Nairobi and their music fuses a lot of different genres including Rock, Hip Hop, Jazz, classical and Reggae to name a few. They have been in the music industry since 2014.

The duo started making music together while they were back in high school, trying out different sounds and building their chemistry. Their first EP drew some attention to them with singles like North and Dark Skin making it to radio. Despite the early acclaim, they had a hard time convincing their parents of the zeal to forge ahead with their musical journey. Later, they met Peter Nduati who is the CEO of Pine Creek Records and Resolution Insurance Limited.

He liked their music and was keen on forging a partnership with them. The duo later shot a video in early 2016 and played a few shows following that including a concert of their own and being the flagship act for the Kenyan leg of the international Sofar Sounds. It took about a year and a half of Self Discovery & negotiations to arrive at a common vision with Peter & The Pine Creek Family and in 2017 we commenced work on our debut album.

They were signed with Pine Creek on the 10th of May 2018 and the deal was worth 3.5 million shillings. As part of the deal, Pine Creek has been covering all their expenses since they signed with them. They have confidence that Pine Creek will take them to the level of their vision. “South Africa has Nasty C, Nigeria has Wizkid, Davido, Tiwa Savage & Patoranking, Tanzania has Diamond platnumz and now finally, Kenya has their own champions ” says the duo.

Their biggest releases since 2014 have been North and The King of Hearts. Links to some of their music are;

The King Of Hearts

Meet Me in Nairobi

Pine Creek Records was founded 10 years ago as an artist management company. Pine Creek has handled well known artists such as Mr. Lenny, Atemi, Anto-Neo Soul and Wendy Kimani. The label has recently signed Amani G. Pine Creek Records intends to get support from more brands on their journey in order to amplify and see them reach fantastic heights.

H&S Magazine had the privilege to interview Mankind. Here are some of the questions we asked and this is what Mankind had to say…

You have been compared with Coldplay an international Rock band. How does it feel and what should the Kenyan music fans expectations be?

Well, seeing as we’re both core fans of Coldplay, it goes without saying that it’s an honour to be even mentioned in the same sentence at such an early stage in our career, so it’s definitely an honour
As for what our fans should expect, in A phrase, they should expect an entirely new reality. You’ll get that once our Album is out.

Your song has been released on Tuesday. How does it feel? Tell us a little about the song, how did you come up with the lyrics and what inspired you?

Well I don’t know about everyone else at Pinecreek but I’m certain the two of us are a heaps of nerves and we’ll continue that way for another week or so. As an artist releasing music especially, that you’ve exposed yourself in is almost as nerve wrecking as walking a child to school for the first day, you just don’t know what will happen, if they’ll love or hate it or even more if they will be embraced by the others or not so it’s a precarious position.

The song is called Take & Go and it’s primarily about self discovery. Now I’d love to tell you more but we have a rule between the two of us to respect and treat our music like a painting, and that means allowing people to come up with their own meanings and interpretations as well .

About the lyrics, well I (M.A.N.E) was in the kitchen of a very old friend’s house alone and there was a blackout, first there came a rhythm and then almost like magic followed the words the evolved much later into the lead single off the Album, I pitched the Song to Alexander (The Cloak) and he went wild, sat with the Song for a while and wrote the rest of it and finished the pilgrimage for us. I think the biggest inspiration was where we were in our lives at the time, being Millennials and Gen Zs in this day and age, it’s not very easy to know exactly who you are from the get go, but there definitely were some other factors.

What message would you like to convey to all your fans who have been following your music? What should they be expecting with your latest album that you are working on?

To all our fans that have been listening to our music so far, first we want to show gratitude for sticking it out and assure you all that the Album will be one for the ages. We look forward to sharing this journey with you and thank you all again for your continued support. 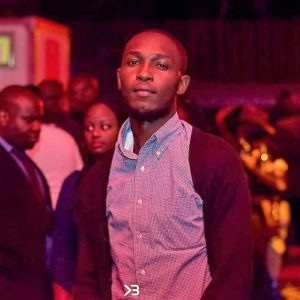 What made you fall in love with Mankind? What is your favourite song?

Iʼve always been a huge listener of Alternative music and in late 2015, I heard a song on radio that immediately caught my attention and I immediately fell in love with it. However, there was one problem though. I didnʼt know who sang the song. A few months later, while on YouTube, a video popped up on my feed featuring a group that was singing the song! The group was Mankind and iʼve been a fan ever since. I was surprised that they were Kenyan and thatʼs why I probably like them so much because their sound is very different and unique. And oh, the songʼs title was ‘Northʼ, which also happens to be my favourite Mankind song.

How did it feel to be in their presence at the press conference and ask them questions as a fan?

It was an unbelievable experience. It was surreal. When I got the invite, at first, I couldnʼt believe it. But after a while, after the disbelief had died down, excitement took over. I think I was a bit too excited that I even showed up an hour before the event was scheduled to start. It was an unbelievable experience though, especially because of how friendly and down-to-earth the guys were. We even got to chat a little about their music and a few other things, which was really cool. It was truly an amazing experience.

Do you believe Mankind has it to reach international stardom?

H&S Magazine wishes Pine Records & Mankind all the very best! We hope that your matrimony lasts a lifetime and that together you reach the stars!

Mankind - A One Of A Kind Kenyan Musical Duo Seals The Deal With Pine Records
Subscribe To Mankind’s Youtube Channel!