“The bestselling novel and epic love story behind the Hollywood blockbuster, from the author of The Notebook” 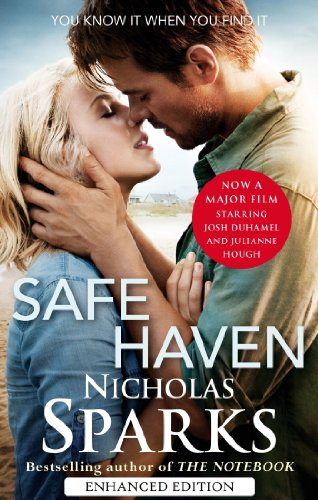 Love hurts. There is nothing as painful as heartbreak. But in order to learn to love again you must learn to trust again.

When a mysterious young woman named Katie appears in the small town of Southport, her sudden arrival raises questions about her past. Beautiful yet unassuming, Katie is determined to avoid forming personal ties until a series of events draws her into two reluctant relationships.

Despite her reservations, Katie slowly begins to let down her guard, putting down roots in the close-knit community. But even as Katie starts to fall in love, she struggles with the dark secret that still haunts her…

Nicholas Sparks is one of the world’s most beloved storytellers. All of his books have been New York Times bestsellers, with over 105 million copies sold worldwide, in more than 50 languages, including over 75 million copies in the United States alone.

Film adaptations of Nicholas Sparks novels, including The Choice, The Longest Ride, The Best of Me, Safe Haven (on all of which he served as a producer), The Lucky One, Message in a Bottle, A Walk to Remember, The Notebook, Nights in Rodanthe, Dear John and The Last Song, have had a cumulative worldwide gross of over three-quarters of a billion dollars. The Notebook is also being adapted into a musical, featuring music and lyrics by Ingrid Michaelson.

Sparks lives in North Carolina. He contributes to a variety of local and national charities, and is a major contributor to the Creative Writing Program (MFA) at the University of Notre Dame, where he provides scholarships, internships, and a fellowship annually. He co-founded The Epiphany School in New Bern, North Carolina in 2006. As a former full scholarship athlete (he still holds a track and field record at the University of Notre Dame) he also spent four years coaching track and field athletes at the local public high school. In 2009, the team he coached at New Bern High School set a World Junior Indoor Record in the 4×400 meter, in New York. The record still stands.

The Nicholas Sparks Foundation, a 501(c)(3) nonprofit committed to improving cultural and international understanding through global education experiences for students of all ages was launched in 2011. Between the foundation, and the personal gifts of the Sparks family, more than $15 million dollars have been distributed to deserving charities, scholarship programs, and projects. Because the Sparks family covers all operational expenses of the foundation, 100% of donations are devoted to programs.

Interview with Bestselling Author Nicholas Sparks: How to Chase a Dream | Audible