The Gilded Ones Kindle Edition 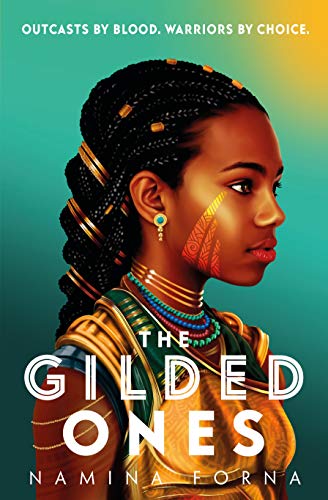 The must-read new bold and immersive West African-inspired fantasy series, as featured on Cosmo, Bustle and Book Riot. In this world, girls are outcasts by blood and warriors by choice, perfect for fans of Children of Blood and Bone and Black Panther.

“Namina Forna Could Be The Toni Morrison Of YA Fantasy.” Refinery 29

Sixteen-year-old Deka lives in Otera, a deeply patriarchal ancient kingdom, where a woman’s worth is tied to her purity, and she must bleed to prove it. But when Deka bleeds gold – the colour of impurity, of a demon – she faces a consequence worse than death. She is saved by a mysterious woman who tells Deka of her true nature: she is an Alaki, a near-immortal with exceptional gifts. The stranger offers her a choice: fight for the Emperor, with others just like her, or be destroyed…

“An enthralling debut. The Gilded Ones redefines sisterhood and is sure to leave readers both inspired and ultimately hopeful.” Stephanie Garber, #1 New York Times bestselling author of Caraval

“Haunting, brutal, and oh-so-relevant. This book will suck you into a world where girls bleed gold, magic fills the air, and the real monsters hide behind words instead of claws.” Roseanne A. Brown, New York Times bestselling author of A Song of Wraiths and Ruin

“The Gilded Ones is a fierce, unflinching fantasy that marks Forna as a debut to watch.” Kiersten White, New York Times bestselling author of And I Darken

Namina Forna is a young adult novelist based in Los Angeles, and the author of the epic fantasy YA novel The Gilded Ones. Originally from Sierra Leone, West Africa, she moved to the US when she was nine and has been travelling back and forth ever since. Namina loves building fantastical worlds and telling stories with fierce female leads.

Namina Forna, Author of The Gilded Ones

Follow The Link Below To Purchase “The Gilded Ones Kindle Edition”