“WARREN BUFFETT is Chairman of Berkshire Hathaway and recognized as the most successful investor in the world.”

Secret Millionaires Club: Warren Buffett’s 26 Secrets to Success in the Business of Life 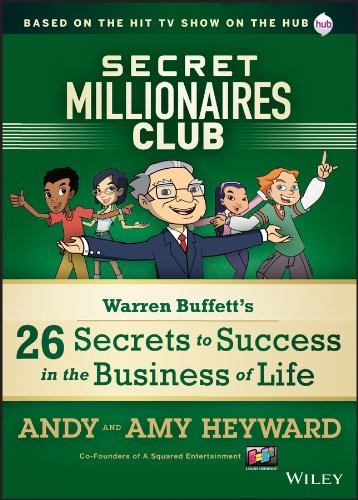 Priceless finance advice everyone can relate to from one of the world’s most respected businessmen and the most successful investor of all time
Of course you know who Warren Buffett is; he’s the most successful investor in the world—maybe of all times. But what do you know about his approach to business and investing? It’s an approach that, over the past four decades, has made him richest man in America and the third-richest man in the world, and that has earned vast fortunes for his business partners and investors. But as Buffett himself will tell you, at the heart of any wealth-building system there are certain core beliefs, not just about finance, but about business, work, morality, your responsibility to yourself, your family and society, and about living a decent life. Written in conjunction with the hit television series, “Secret Millionaire Club” and with Buffett’s input and full support, this book makes Buffett’s financial philosophy and homespun life lessons available to everyone outside his “Secret Club.”

ANDY and AMY HEYWARD are Co-CEOs of A Squared Entertainment LLC (A2), a full-service brand entertainment company. Dedicated to producing original “content with a purpose,” A Squared provides entertainment and experiences that are as enriching as they are entertaining. A Squared is currently producing the Secret Millionaires Club with Warren Buffett, a television series designed to teach financial literacy.

Follow The Link Below To Purchase “Secret Millionaires Club: Warren Buffett’s 26 Secrets to Success in the Business of Life Kindle Edition”